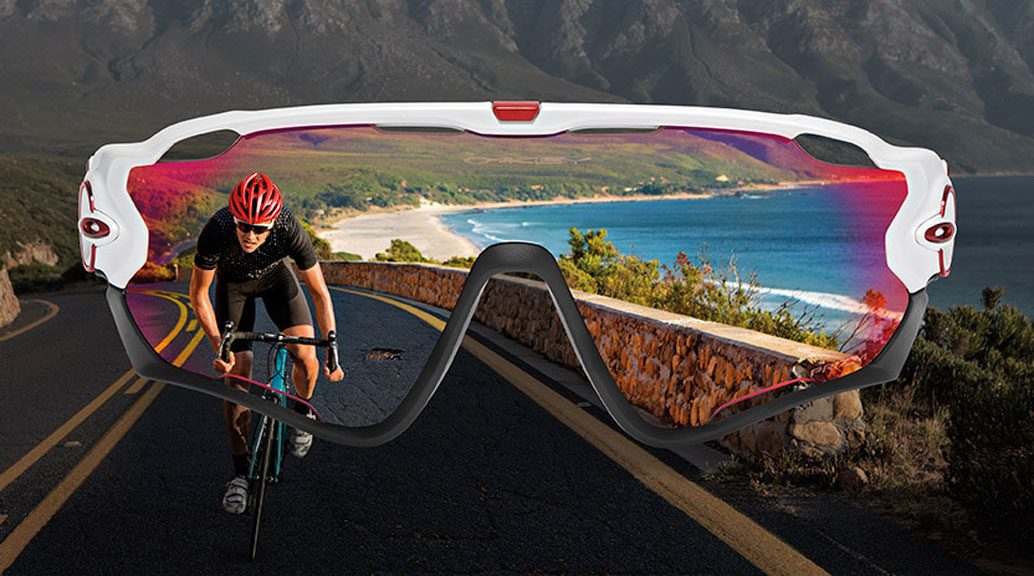 I recently purchased some Oakley Jawbreakers from Tallington Lakes Pro Shop. They are an out and out sports eyewear piece. There’s no way they could ever look good as fashion eyewear, so don’t even think about buying them as a cross over. Don’t be that guy!

The styling is pretty funky and gives really nice shelf appeal. A great range of colours that will leave you torn with the right decision. (I spent a fair amount of time in Tallington Lakes Pro Shop annoying the team, switching glasses in the mirror). The style in no way compromises the function, that’s important. They’ve managed to create a cool looking eyepiece centred on a really solid performance criteria.

I usually race the bike section of a triathlon wearing a helmet with built-in visor. I never tend to bother with glasses any other time as I “know I am wearing them”!  That’s my issue, anything that I’m consciously wearing annoys me. I bought the glasses reluctantly as I was undertaking a desert run, no glasses would be suicidally crazy! I thought I’d give them a whirl on my long Sunday bike ride. They felt like I was wearing the visor, because I had massive field of vision, Oakley’s standard and incredible visual clarity, comfortable and ergonomically designed. The adjustable arms did nothing for me in the shop, I felt it was just something to break and a potential weakness in the design. Actually they were immediately useful. I had them on the smallest setting when running. They fit perfectly, When I went out on the ride I had them on their maximum limit. It held them more securely in my helmet and gave me the confidence that I wasn’t going to loose my lovely looking new purchase, or be forking out for new lenses once I’d lost them to the tarmac.

The lens popped out incredibly easy, if I wanted. It is painfully simple and really obvious. It feels robust and trustworthy. I’ve worked for Oakley retailers in the past, you dread that moment when a customer asks “so how does that lens swap over then”? Once you’ve worked with them for a while its not a drama. You did however see the Saturday boy fill with fear and look for you to step in when confronted with the same request. With the Jawbreaker this isn’t/shouldn’t be the case. It’s very simple. I say the system is obvious, but unlike previous models once you’re wearing them its not entirely obvious to everyone in the world that the lens has the capacity to be changed. The usual strategy of sticking a giant lever on the glasses was always fairly crude and ugly, this system is way more refined.

My old glasses let you know you were wearing them. Your peripheral vision was constantly reminded about the perimeter of the glasses. These have no such issue. The field of vision was exceptional. If you want an out and out sports piece that will perform exceptionally well, these are my recommendation. Running or cycling, they’ve performed impeccably. I’m not traditionally a sunglass wearer! I just had to wait for the right product to come along, and the Oakley Jawbreaker was the one! 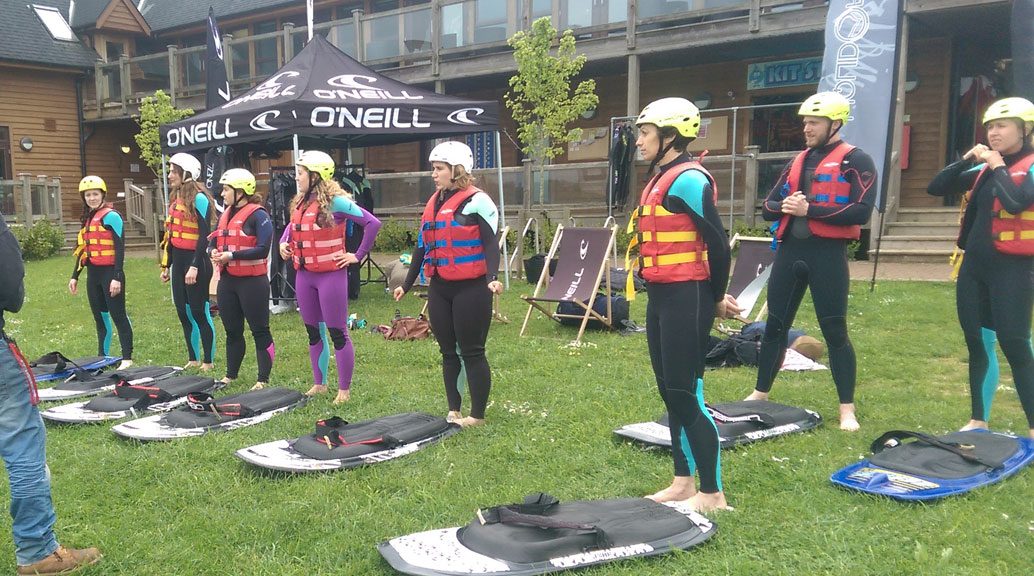 Last week I had the opportunity to go to an O’Neill wetsuit training day, where I got to learn more about their wetsuits and what sets O’Neill apart from other wetsuit companies. Not only did I learn how each suit is made, and why they are made this way, I got the chance to try a Women’s F.U.Z.E. SuperFreak 3mm 2mm wetsuit for myself while attempting to kneeboard and wakeboard at a cable park. And, the proof really was in the pudding.

I really liked this wetsuit! The training day was held at a cable park, on a typically English day – grey and cold. So, I was a bit nervous about the whole thing. I wakeboard behind a boat here at Tallington Lakes, and I usually spend a lot of time in the water, so with never being on a cable I knew I would spend more time in the water than not. After learning about how the suits are made, I know I shouldn’t have been surprised by how warm I was. But, I was. I was even more surprised by the fact I was warmer wearing the wetsuit in the water, than I was wearing my clothes out of it!

The SuperFreak wetsuit is made with a super stretchy UltraFlex DS Neoprene, and stuck together with O’Neill’s glued and blindstitched (GBS) seam construction. The stretchy neoprene means you have unrestricted movement; and because the GBS stitching only goes part way through the neoprene, and is then glued, there is minimal leakage. O’Neill also place additional tape in all areas of excessive stress too, just to make sure! The suit has been designed with ‘seamless paddle zones’ which means that areas such as under the arm are constructed out of one panel. Consequently there are no seams to hinder movement (when paddling) and eliminates rashing; which in my case was a real bonus when I kept falling and having to swim to the lake side…  And, I can see how great this would be when surfing or swimming for extended times.

The SuperFreak has yet another one of O’Neill’s tricks, the F.U.Z.E Entry System. F.U.Z.E stands for Front Upper Zip Entry, which basically means what you think; you get into the wetsuit from an opening in the chest. I was pretty intimidated by the concept, but once I tried it, I actually found it easier to get into than the usual back zipped wetsuits. F.U.Z.E follows the same concept of the Patented Z.E.N Zip Entry, where the zip system is added to the suit separately, having the main body of the suit constructed in a way that keeps as much water out as possible.

A few other treats included with this suit are the Krypto Knee Pads, a double Super Seal Neck and a neat little external key pocket on the thigh! The SuperFreak keeps the water out and keeps you warm like no other wetsuit ever offered at this price level. And, I can 100% recommend this, and any of the women’s O’Neill wetsuit, if you are after something comfortable, warm and flexible for these spring and summer months ahead!

Thanks Sammy (Snowboard and Climbing Instructor) 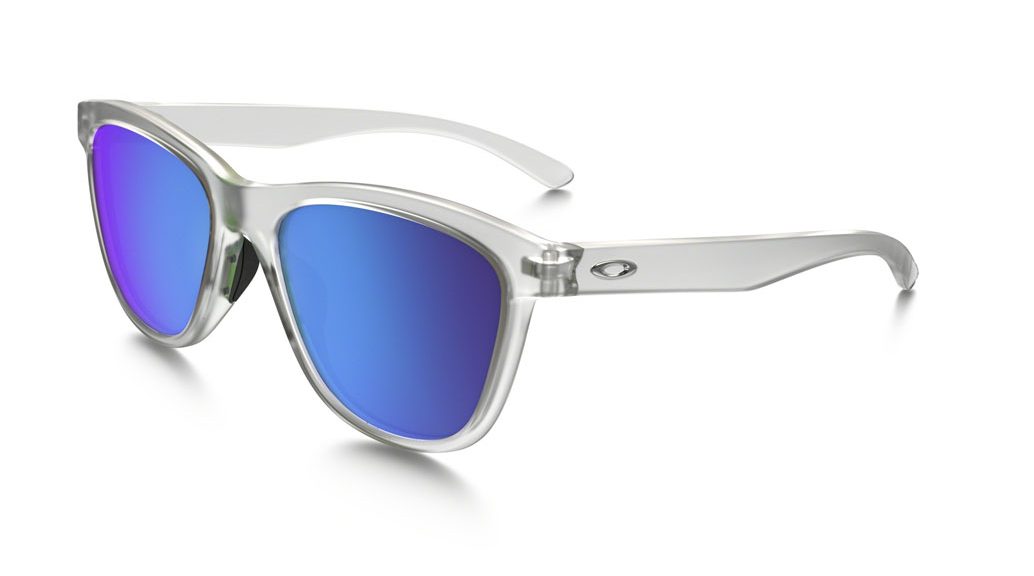 So what are the new Oakley Moonlighter sunglasses like? I had the good fortune to try a pair, with Frost frame and Sapphire Iridium lenses.

The Moonlighter’s are a perfect mix of the retro late 80s style, with modern Oakley technology. The frosted frames are not only a cute colour combo with the sapphire coloured lenses, but they are incredibly durable and lightweight due to their stress-resistant O Matter frame material. Comfort and performance is important to Oakley, so they have a unique Three-Point Fit design that holds lenses in precise optical alignment, while their Unobtanium nose pads ensure a snug, and secure fit.

The Sapphire Iridium lens add a cute and bright ‘pop’ of colour to your day, at the same time they protect your eyes from UVs with Plutonite lens material, which filters out 100% of UVA/UVB/UVC & harmful blue light up to 400nm. And, like all Oakley eyewear The Moonlighters include High Definition Optics (HDO) which is a collection of patented technologies that allow Oakley eyewear to meet or exceed the testing standards of the American National Standards Institute for optical clarity, visual fidelity, and impact resistance.

So if you know your face dimensions, you’ll know if they fit. Or you can pop in-store and try them on!

The more I wore them (and cheekily checked out my reflection) the more I liked them. They fit comfortably on my face, and they certainly made things clearer and reduced the glare/sun strike on our artificial slope. I think the only negative I have about the Frost Sapphire Iridium Moonlighters is that the lenses are not polarized, however, other styles have polarised lenses. Apart from that, I think these shades are pretty neat. And, if you’re someone who wants trend and functionality out of a pair of sunglasses, I would highly recommend you try these out! I mean, they’re cute, lightweight and durable… What more could you want?

Thanks Sammy (Snowboard and Climbing Instructor)