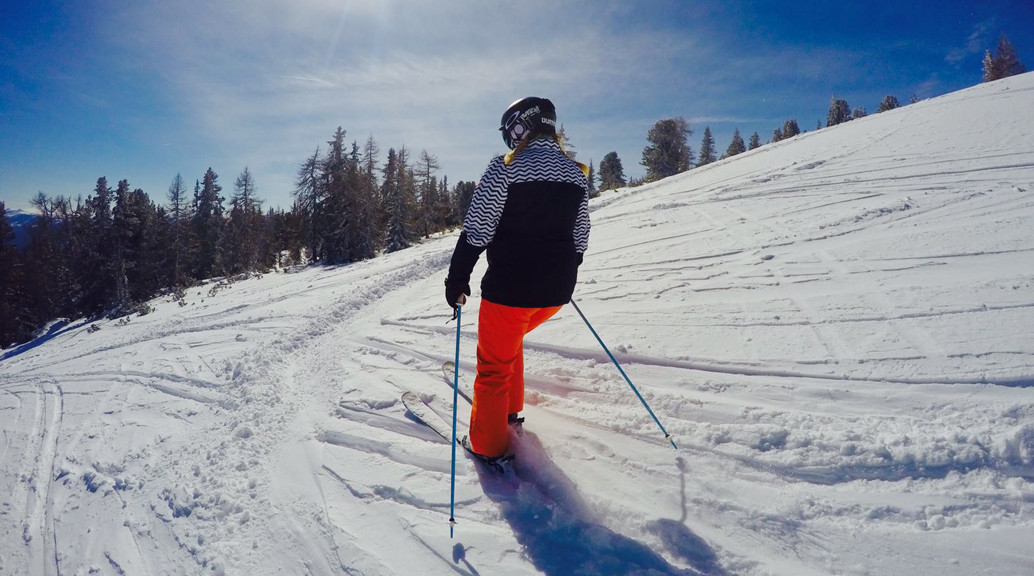 Personally I am a bit of a sucker, and maybe slightly biased, when it comes to Austria as a ski destination. Recently, my girlfriend and I enjoyed four days skiing in the Lungau region and were definitely not let down with everything that it had to offer.

As we only had four days available we wanted to head somewhere that had a quick transfer time to allow us to maximize our ski time. With that in mind, having spent two years in the Salzburger Sportwelt and being fascinated with this area, we wanted to explore a little further. Lungau is around 1 hour and 20 minutes from Salzburg airport, and with British Airways early 0645 flight landing at 0900, we were on the mountains skiing by midday with ease.

We were picked up by Ben and whisked back to the beautiful Chalet Mur, which is named after the river that runs through the region. The Chalet is run Ben and Clare and is located in a village called Stranach just outside St Michael Im Lungau. After Clare twisted our arm into an early lunchtime Gluevine, we headed up to one of the smaller resorts of Sperieck and Grossarl for an afternoon ski. It was snowing all the way from the airport and wasn’t disappointing on the hill, even though the wind was up it made for an afternoon of relaxed skiing.

On Friday, with the sun making a blinding appearance, Ben whisked us off to Fanningberg or “Funningberg”, as the locals know it. This area on the piste map seems quite small with only 5 lifts but don’t let that phase you at all. There are plenty of runs for all abilities with the main talking point being all the fun that can be had in and around the trees. Fanningberg offers safe off piste as the ski patrols do cover the marked off pistes routes as well as on. I had some of the best tree run skiing at this resort with my girlfriend enjoying the wide groomed pistes to practice her carving. We would definitely head back again. The resort also offers sledging so to finish the day, we grabbed the last lift up, knocked back a couple of Frucht Schnapps and headed down the main slope back to the bottom.

Saturday came and promised to be another good-looking day so we hopped on the free ski bus, which stops just outside the Chalet, for the 5-minute ride up to Katschberg & Aineck. “Katschi” offered some of the best red runs that we have ever skied on and true to the Austria that I know it was like millionaires ski slope. Unfortunately for us, the winds picked up in the afternoon closing Aineck, which has the longest run in Austria at 7.2km. That evening, the snow came in and started to get our hopes up for our last day.

Our final day came way to quick as always but Ben had mentioned about skiing Obertauern. It is the biggest, highest and probably most well known resort in the Lungau region. The village itself sits at 1630m with the highest lift taking you up to 2313m. The resort is all in a bowl, very easy to navigate around and offers a little something for all types of skiers. We were lucky, as the snow had continued overnight

At the end of every day when we walked in Clare had prepared a rather tasty cake with plenty of tea and coffee. After a shower and a relax it was time for an evening meal and to say Clare was a cracking cook would be a major understatement. Each meal we had was a delicious home cooked hearty dinner. There was plenty (and I mean plenty) to go around and every need was catered for, even our fondness for a large glass of wine.

There are several different resorts around the region and each seems to offer something a little different. We would thoroughly recommend Ben and Clare at the Chalet Mur, as thanks to them, our holiday was even more perfect! 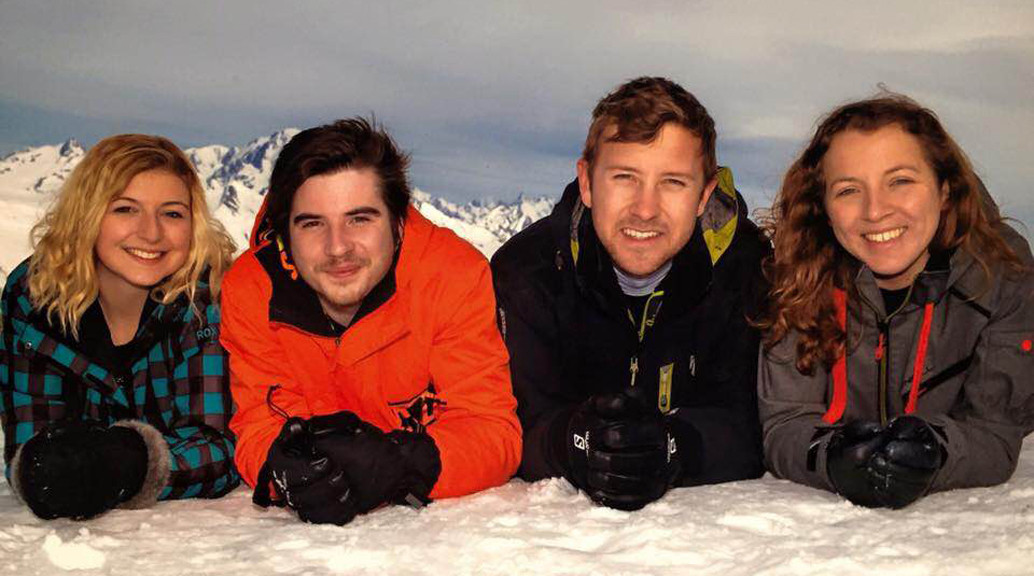 The Les Arc 1800 resort is located on the outer edge of the Vanoise National Park which forms part of the Italian border around 10-12 hours drive from Calais or a 3 hour transfer from Geneva Airport. The resort is linked with La Plagne and Peisey-Vallandry creating one of the largest skiing areas in the world called ‘Paradiski’ and boasts 425km of pistes; ranging from easy relaxing blues to challenging blacks.

Les Arc itself is made up of four smaller resorts Arc 1600, Arc 1800, Arc 1950 and Arc 2000 with its claim to fame being the first resort of its type to open in Europe. I stayed in Arc 1800 picked for its location close to the Vanoise Express which is a huge 200 person cable car connecting Les Arc and La Plagne, in fact it’s one of the longest and fastest cable cars in the world!

Built back in 1975 Arc 1800 is not only the largest resort but also the liveliest with lots of bars and restaurants, my favourite being ‘Barking Mad’ with its comfy outdoor seating and views out over the mountains with a pint of beer costing €5, the perfect location for a spot of après ski.

We stayed at L’Alliet in a self catered apartment located in the Charmettoger region of the town. This apartment is a little gem recently renovated in 2015 in true alpine style, what we loved was the flexibility of either cooking some homely food or dining out at the various restaurants found a short 5-10 minute walk away.

In all there are five lifts out of Arc 1800 but by the best and easiest is the Transarc 1 which connects to the Transarc 2 at the mid station. Once at the top you have excellent access to a huge variety of newly groomed runs (if like us you got the first lifts up). The snow conditions were good throughout the week although some started to become icy leading back down to town at the end of the day, all in all the conditions were good despite the slow start to the season. And best of all we had blue bird days most of the time we were there, what more could you ask for!

One of my favourite runs would have to be the Grands Melezes which starts at the top of the Vagere chairlift, the run is both long and wide with the conditions being perfect allowing me to perform some large sweeping carving turns.

Overall this resort and ski area is one of my favourite with its mix of glacial high altitude runs and the option to ski through the trees lower down during poor snowy conditions.

Thanks Michael and friends! 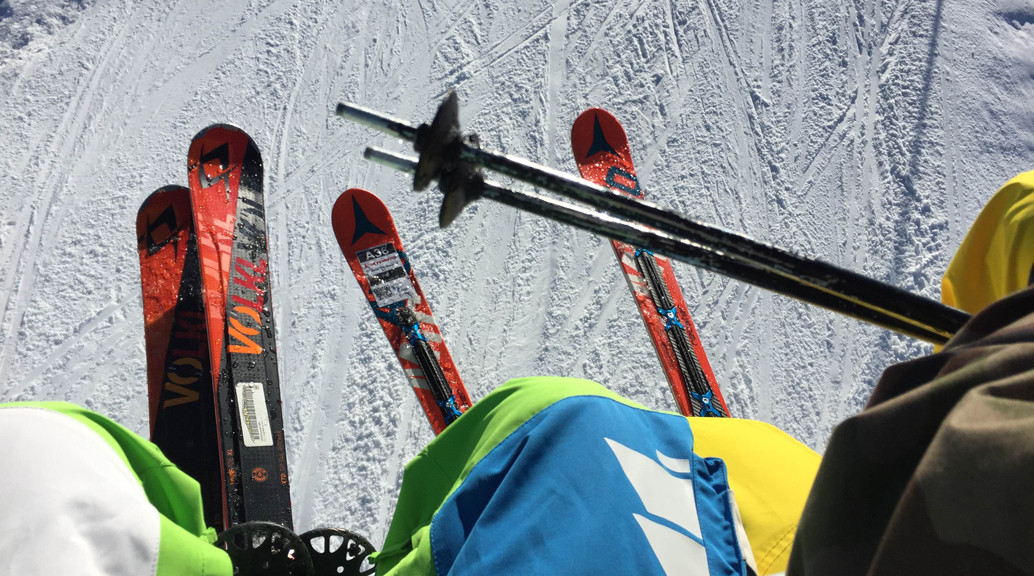 Arguably the most well known of the resorts within the Portes Du Soleil (PDS), Morzine is located in a valley with ski areas either side, around one hour from Geneva airport or roughly eight hours from Calais. It was the venue of our ski test in December when unfortunately the snow wasn’t fantastic. Even though it sits at a lower altitude than other European resorts, it is still favored heavily with British skiers due to the extensive ski area. The PDS’s motto of 12 resorts one pass highlights the 600km of skiing available. I have stayed in a few different areas within the PDS and always prefer to stay in Morzine as it is roughly in the middle.

Morzine itself is a very picturesque ski town with a variety of activities to do whether skiing is your primary activity or not. The town itself has plenty of bars like Coyotes’ and restaurants like L’etale; and if lager is not your preferred beer, it also boasts the first real ale bar in the Alps. At Le Bec Juane, all the ales are brewed in house and a 4 pint pitcher and a very large plate of Nachos will cost €20.

Skiing wise there is plenty to do for everyone. Out of Morzine itself you have the Pleny Bubble, which takes you up the South side of the valley and connects you with the tree line runs of Les Gets, Nyon and Mont Chery. On the North face, you have the Super Morzine Bubble that takes you across the valley and up towards Avoriaz, which is the highest resort in the PDS and is part of the Helly Hansen Ski-Free campaign. A short bus ride away you have the L’ardent Bubble that will connect you up to the Linderet Goat Village where there are nursery slopes and several lifts connecting you with Avoriaz, Chatel and Switzerland. Off piste is incredible when it’s on in this area. Happy Valley and Hidden Valley are located around the Chatel side and offer perfect powder bowls. Switzerland also offers a vast area of off piste with Les Gets offering some real hidden tree runs.

I would always recommend a full area pass as it allows you to explore literally everywhere. Whether you are riding powder in Avoriaz, Les Gets or Chatel or just looking to charge around the runs through France and Switzerland. The full area pass will cost you around €250 for six days however there are deals to be had so worth checking the website!

Overall, the town of Morzine is a perfect base if your looking to explore the second largest ski area in the Alps. It literally offers something for everyone from complete beginner to top end skier or boarder through to powder bowls and tree runs to immaculate hard packed pistes.

I just got back from the Italian ski resort of Pragelato Vialattea, which is located in the Piedmont region; due to its western curve the ski resort its dubbed the ‘Milky way’. I have never been to this area, and I had heard little about it. I guess it doesn’t have the boasting name of well-known resorts such as Courcheval or Val d’Isere, where you seem to pay 10 euros for a pint of beer (which they never seem to fill to the top!). The ski area is huge, unexpectedly huge in fact. The six ski resorts of the Milky Way (Via Lattea) differ in size and atmosphere such as Sestriere, Sauze d’Oulx and the home of the 2006 Olympic games, Torino. END_OF_DOCUMENT_TOKEN_TO_BE_REPLACED

Flachau is the most known resort in the Sportwelt Amade with the Amade itself the second largest ski field in Europe. It is easily situated some 40 minutes south of the city of Salzburg so offers a very easy transfer time. For those drivers amongst us (our group being one of them) it is an easy 10-hour drive from Calais, taking you through six countries in all. There are no toll roads in mainland Europe that you must navigate and there are plenty of lovely cities along the route to make the trip a few days longer. END_OF_DOCUMENT_TOKEN_TO_BE_REPLACED 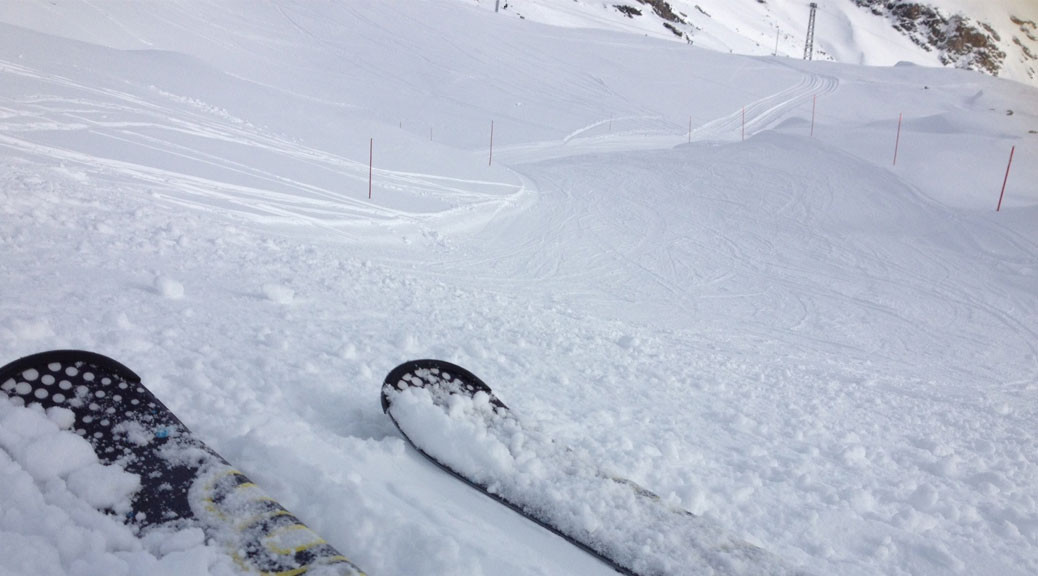 La Rosiere in Savoy is situated along the French – Italian border of the French Alps, and resides at 1850m on the slopes of Le Roc Noir (2400m). The resort is linked with La Thuile, in the Aosta Valley, as part of the Espace San Bernardo which provides plenty of skiing (snowboarding) on easy to challenging pistes, powder fields, parks, tree-lines and much more. The scenery is breathtaking from every angle; with the majestic Mont Blanc a focal point! END_OF_DOCUMENT_TOKEN_TO_BE_REPLACED