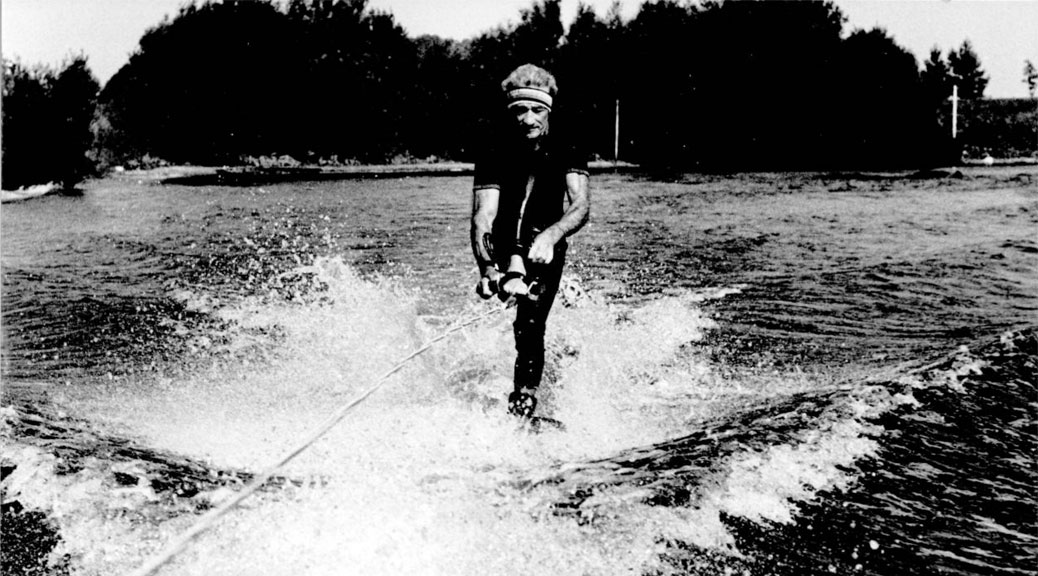 Ernie started to water ski late in life at the age of 42, after seeing a sixty-year-old women have a go in Ibiza, and dominated the veteran class. In his time Ernie won over eighty National and International titles. Ernie held the British title for five consecutive years; it may have been six but he didn’t compete in the sixth!

Ernie spent his time between ‘the home of water skiing’ Florida, USA and living above the Pro Shop at Tallington Lakes. Ernie lived and breathed water skiing and was instrumental in developing the water skiing facilities here at the lakes. Ernie was part of a team that successfully brought the 1988 World Veteran Championships to Lincolnshire.

Ernie water ski jumped until he was 70, and contiuned to ski until 77. Even after his career was over he was still enthusiastic about the water skiing facilities as he was when he laid the first slalom course, here at Tallington Lakes

Ernie was a quiet and unassuming man, who amassed a huge collection of titles and trophies. His drive and enthusiasm for the sport is missed in the water skiing community. Describing water skiing Ernie said “it’s a family sport that anyone can learn”. He loved to get kids involved in the sport he was so passionate about!

“Ernie was a winner and a leader, no doubt about that. He was also one of those very special, yet rare people that can enthuse and inspire others just by being himself.

As a youngster you always wanted to ski well if he was at the tournament. He always noticed how you had got on and not just for a few favorites but all the youngsters. Quick to put an arm around you if you had suffered a disappointing run and offer some quiet words of encouragement you would not want to earn his disapproval for anything less than good behavior.

A naturally funny man, he was so welcoming to the newbies that came into the Tournament Scene. A terrific character who was generous with his time and knowledge. He once said to me, when I had just been very harshly disqualified from my second trick pass by an over zealous chief judge “Always listen to what someone has to say. The least you will find out is that they don’t know what they are talking about”. An absolute gem of wisdom delivered perfectly to soften the blow, just for knowing him!

We owe him a debt of gratitude which is best served by continuing to service our great sport as he did.

So I am honored to be able to Judge in his Competition.”

The Ernie Ward Memorial Cup is an annual reminder of the man, his achievements, and the development of the water skiing facilities here at Tallington Lakes! The trophies awarded on the day are from Ernie’s collection, because as his widow, Jeanie, explains “he always wanted to put something back into the sport”.