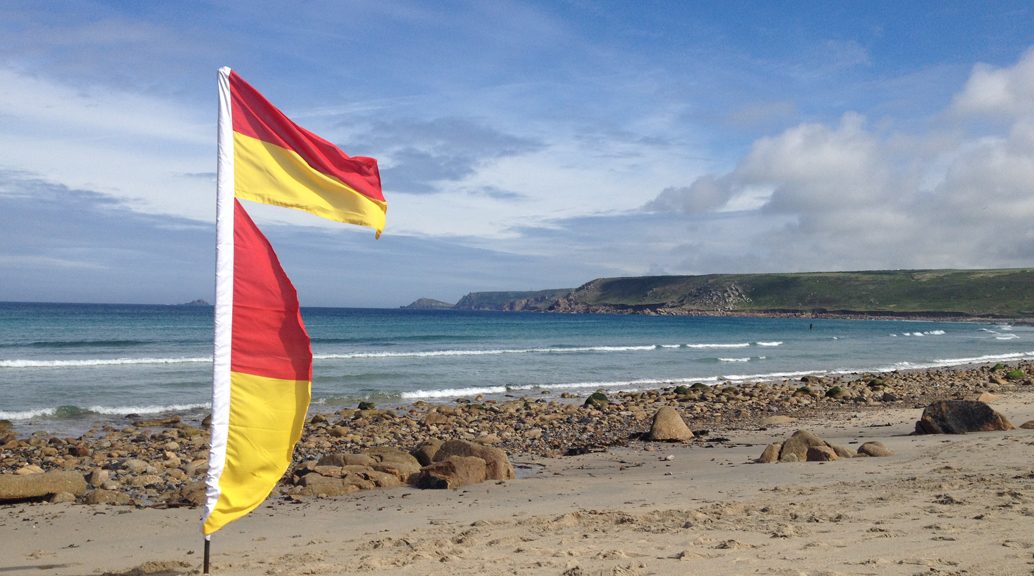 In the words of Red Paddle Co, the Ride is the ‘Swiss Army Knife’ of SUPs, it’s suitable for ‘almost any rider for any purpose’. So having participated in one of Tallington Lakes SUP Taster Sessions, and spent many an hour paddling around the lake on a Ride 10’6”, I thought it time to venture to the sea – to see how versatile the Ride is!

I chose the 10’8” stand-up paddle board, over the 10’6”, because I thought it would be more stable, for me, on the sea. And as for location, I decided upon the North Atlantic Ocean – Sennen. Sennen is on the North Cornish coast (just up from Land’s End) and is a celebrated surf location; so I may have bitten-off-more-than-I-can-chew for my first SUP outing on the sea!

With the car parked, overlooking the fabulous Sennen beach, I unpacked my SUP, grabbed the Titan pump, and proceeded to inflate! Twenty minutes later I was walking on the sand towards the sea – yes they really are that easy to inflate!

Fortunately the swell (waves) was small, at low tide, so out I paddled beyond the breaking waves – on my knees. Once ‘out back’ I proceeded to stand. As I bobbed between crest and trough, of the waves, I got myself stable and started to paddle. Momentum helped with the balance, but it wasn’t too long before I was in the sea – splash! Totally refreshed and invigorated by the cold sea I was back on my SUP, and began to paddle, looking ahead at the waves and trying to get into a rhythm. I began to feel confident and paddled along the beach – with the wind and against the wind. I was doing OK!

The nylon alloy paddle worked well, but I felt the better shaped glass paddle would have been a better choice. I have used the glass paddle on one of the Red Paddle Co Tours, that visited Tallington Lakes, and felt that paddle gave more propulsion per stroke. And because momentum was fundamental to better balance, for me on the sea, it would be worth the investment!

I returned to shore. The small breaking wave nearly had me off, but I managed to save myself in the shallow water. I may have been out for an hour, but it felt longer. My core, arms and legs felt they had had a workout, so a cream tea was in order!

Over the next few days, in slightly bigger swell, I paddled my stand up paddle board. Confidence grew, and I thoroughly enjoyed paddling to-and-throw on the North Atlantic Ocean. So now it was time to try surfing! Needless to say it was the rider not the SUP that struggle in the breaking waves, the Ride 10’ 8”performed well – however this is where the smaller 10’6” would have been a better choice.

So is the Red Paddle Co Ride the ‘Swiss Army Knife’ of SUPs? I think so, however, a river trip needs to be completed to say for sure – I’ll let you know how I get on!