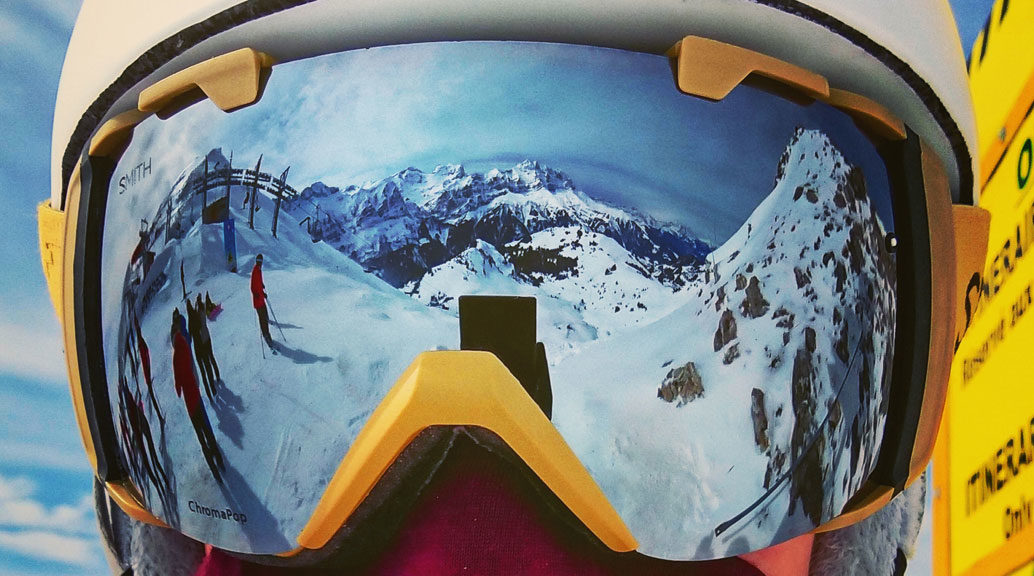 It’s been almost two years since the beautiful partnership with my Smith’s sunglasses began and I couldn’t have asked for a better pair. We’ve been all over the world together from the likes of far East Asia to the busy bustling cities of Europe.

However, as great as my sunnies are, they’re no match for alpine skiing conditions, which is why I’ve upgraded to the big guns. Tallington Lakes were kind enough to let me test out a pair of Smith I/OX snow goggles as I embarked on my adventure to the French Alps. When I first opened the box a bright smile was looking back at me, it was my own reflection cast from the pristine conditioned ‘ChromaPop’ lenses.

I’ve been skiing now for the best part of twenty years and I’ll be honest, I’ve never really invested too much into my snow goggles. Comparing my old pair to these I/OX goggles, it’s clear to see there’s no competition. It’s like trading in your old banger of a car, that’s just about managed to get you from point A to point B; for a souped up, all singing, all dancing teched out super car!

If I knew it wasn’t impossible, I would have placed a bet that Tallington Lakes had rigged the weather system in order to really allow me to test these goggles. In the one week I was there, I encountered harsh snow blizzards, gale force winds, torrential rain, depressingly overcast to extreme dazzling sunshine without a cloud in sight.

These I/OX goggles come equipped with two different lenses in order to combat the diverse weather you can clearly come across whilst in the mountains. Do not fear though, unlike other interchangeable lenses where it feels as if you are solving a rubix cube for hours, the lens swapping process here is very straight forward.

The first lens provided is the ‘ChromaPop Sun Platinum Mirror’ with a VLT (Visual Light Transmittance) of 13%. In English, it means only 13% of light passes through the lens. 13%?! I’ll do the maths for you, that means your eyes are shielded against a whopping 87% of all light particles trying to shine through. You will be correct in thinking, that’s an astronomical amount of light being blocked – however what you need to realise, is the UV rays from the sun are more powerful when you’re stood on top of a mountain. Those rays are then reflected from the snow which create the super annoying blinding-glare effect. Therefore a 13% VLT rating truly is a remarkable feat and not only does it work, it works brilliantly. I never once felt myself squinting from the sun glare. The goggles allowed me to easily pick out my turns in order to avoid the treacherous trees and murderous moguls.

For extreme low light conditions, such as the total white out blizzard I unfortunately ended up in, Smith have designed the ‘ChromaPop Storm Rose Flash’ with a VLT rating of 50%. If you’ve ever been unlucky enough to ski in a white out, you will remember the dreaded feeling of being lost, lonely and confused as you vision becomes extremely impaired. You’ll remember trying to pick out those piste pole markers you took for granted as you attempt to safely escape the mountain – the skiers and snowboarders who were only a few feet away completely disappear and all you end up saying on repeat is “I can’t see a thing in these goggles”. Sound familiar?

Without those low light lens on, I think I’d still be stuck on that mountain top.

An important issue with snow goggles is the potential fogging up of the lenses. This can be due to a number of different reasons from the change in air temperature to difference in altitude to simply the hot panting breath you produce when working your legs overtime to get those turns in.

Thankfully Smith have countered all these problems by installing an incredible feature called the ‘AirEvac’. It allows for a constant air flow in order to reduce the risk of foggy goggles. On top of this amazing feature, the Smith lenses are equipped with 5x anti-fog inner lenses which provide five times the fog absorption compared to anything else on the market!

I’m a wimp when it comes to the cold so I always wear my neck-warmer around my face and over my nose to stay warm. Therefore every time I breathe out, the hot air rises and attempts to pierce through my goggles defences. If I were in my ‘old banger’ goggles I surely would have fogged up and skied off a cliff. These goggles didn’t even slightly fog up once during my entire week!

The extra-large spherical lens of the I/OX allows unparalleled peripheral vision which is absolutely vital when you’re skiing on a busy slope surrounded by potential collisions.

To top everything off, the goggles are perfectly designed to fit comfortably on your face whilst attaching easily to the back of your helmet.

With the weather forecast ahead still predicting a huge amount of snow this season, it’s not too late to book another ski adventure. I cannot recommend these ski goggles enough – imagine a ski holiday in ultra coloured HD, it’s there and yours for the taking!

Check out our selection of Smith Optics snow goggles, here.