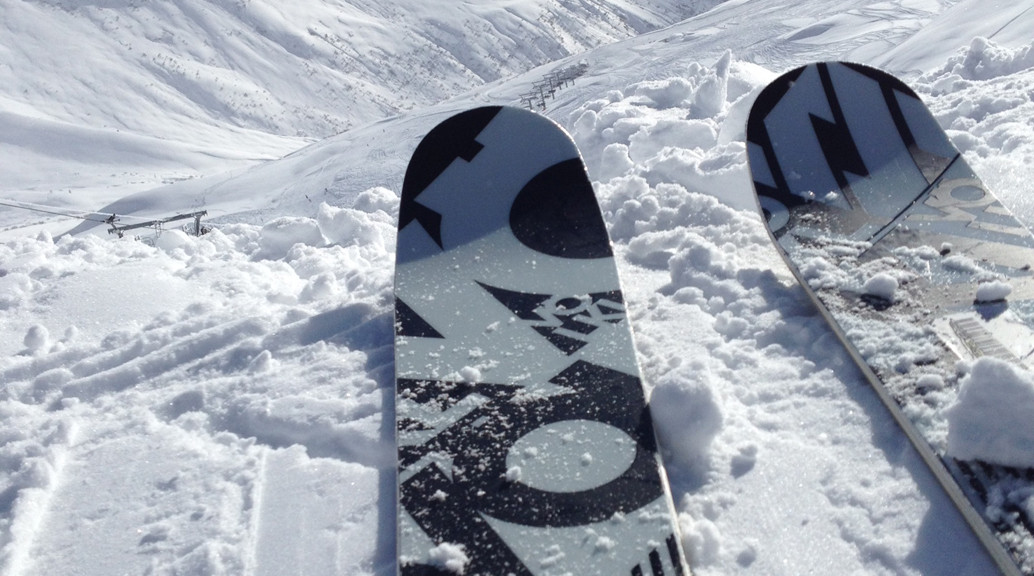 So what does a quinquagenarian, recreational skier think of the Volkl Kendo skis? Volkl kindly provided a pair for me to review on my annual ski holiday to La Rosierre, France.

I taught myself to ski at the Lecht, Scotland in the 80s and had a few lessons, in Austria, while the children were in ski school (the only way to convince them to go was to say we were all having lessons)! I go skiing once a year, and look forward to six days of fun sliding down a mountain. I’d class myself as an intermediate to advanced skier, but fully aware that purist would pull my technique to pieces. I’m happy that I can control my skiing, at speed (which means I think it’s fast, but my sons tell me otherwise), down red and some black runs! Historically I would hire what are considered piste or all-mountain skis. And when I say all mountain, they are 80% piste 20% off piste.

Fortunately most holidays have been groomed pistes (corduroy), until last year when knee-deep powder on the piste took a little fun out of the sliding down a mountain! I wasn’t very good in knee-deep powder; was it me or was it the skis. Whatever it made me think; I go skiing for six days a year, what type of skis should I buy? Piste or something suitable for powder? If money was no object, I’d have one of each.

So when I explained my dilemma to the guys in the Pro Shop, they suggested I try an all-mountain ski that was more off-piste focused such as the Volkl Kendo skis.

The Kendo skis are a 50-50% piste off-piste ski, for an advanced to expert skier, so may be ‘punching above my weight’ with these skis!

The first thing I noticed was how much wider the skis felt, the waist was in fact 10mm wider at 90mm compared to my old skis. The ski also had a much larger rocker at the tip which helps push the ski up on to the powder rather than slicing through it. And the bindings were drilled onto the ski, rather than the usual rail system I was familiar with.

So it was in at the deep end (literary) because there had been plenty of snow in the resort! I would have like a few groomed pistes to find my ski legs, but that wasn’t an option, so the first morning wasn’t great. However after a stern talking to myself, and a few pointers from my son, the afternoon was better; and I began to embraces the conditions and what the Kendo skis offered!

During my week’s skiing we had over a metre of snow, and poor visibility, so not quite the conditions I had hoped for, but never-the-less ideal conditions to test the skis.

So what did I think? A bit like the skis 50-50. The skis were a lot stiffer than I am use too, because they are designed for someone of a higher ability, and turn radius was bigger than previous skis at 20.8m; so I found myself having to work extremely hard down the slope. The poor visibility didn’t help! I also struggled a little on the ice, but that may be more down to technique and not fully engaging with the ski. However, what I did find, is that the skis floated through the powder, which had hampered me before.

When the visibility improved, it was a different story. With greater confidence I carved with gusto down the piste. The skis just ploughed through the powdery ‘crud’, that had built up from other skiers, thanks to the ‘rocker’; and the large turning radius no longer hindered my progress, as I zig-zagged down the slope. I had fun!

I now understand where the guys in the Pro Shop were coming from; a ski for all conditions because the weather and snow conditions cannot be guaranteed for the six days I am in resort. And these Kendos certainly ‘cut-the-mustard’.

I think I had ‘bitten-off-more-than-I-can-chew’ with the Kendos, though,  but I certainly like that style of ski. Perhaps a similar all-mountain ski that is more suitable for my ability, such as the Line SuperNatural skis would be my choice. And this is an important point to note when buying skis – be honest!

Epilogue: there isn’t a right or left ski, but I found I skied better when I could read ‘Volkl’ across the tips of the skis 🙂