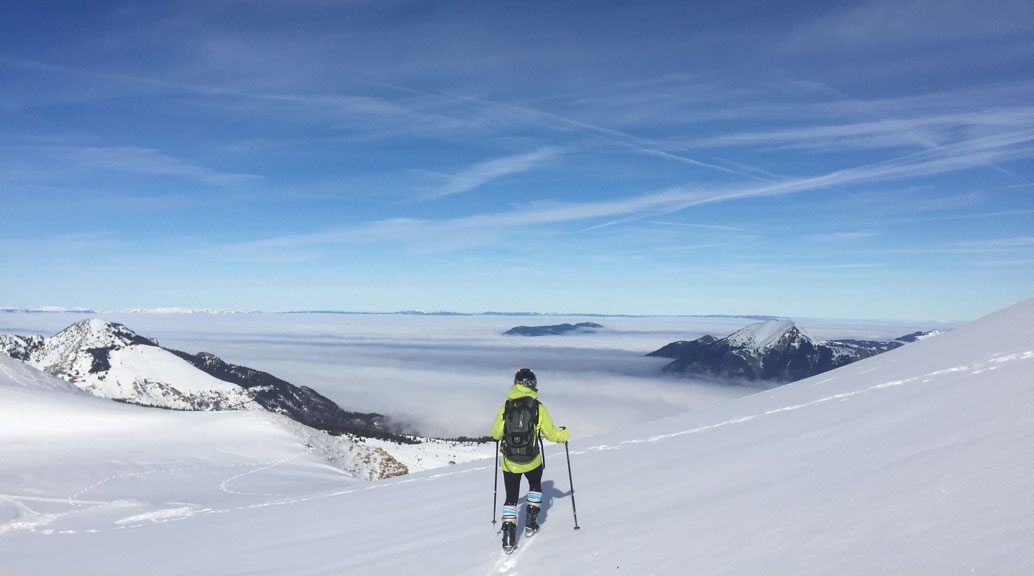 The day began with a big bowl of bircher muesli (oats soaked in apple juice) and a peanut butter and banana smoothie. Once all packed and ready to go we skied straight out of the front door to get the car and headed to the Col du Colombiere. With the col closed in winter, the tour begins with a nice a steady climb following what is usually the road. Perfect to get the legs warmed up before the steep top. The temperature at dawn was -14C, which made it bitterly cold on the hands when putting on our skins. Hence it was in our interest to get moving quickly.

The sunrise confirmed the forecast of a crystal clear sky, and highlighted the mountain peaks with a orange glow. Once around the first corner we were pleased to see a group of five, about 15 minutes ahead, sluggishly putting the tracks in for us. Perfect! After starting from the car all still wrapped up with gloves, down jacket and a head band, we were starting to warm up nicely. Knowing what lied ahead, the pace was gentle.

We made it to the top of the col with ease, but we knew from there the real climbing would begin. Without wanting to get damp from sweating, and with the sun coming up over the mountains, we thought this was the perfect time to shed some layers, have a sip of water and get the sunnies on. To be efficient in the mountains, we always try and plan our stops and make the most of each rest break. This saves energy as well as time.

With the other group still in front, we were cruising along in their tracks all the way up to the point our couloir was in view. We cut off right, which gave us a good feel of the fresh snow, and got excited for the decent. After a steady climb of nearly 900 vertical metres we reached the couloir to the peak of Pointe du Midi. At which point two other skiers, coming from a different direction, had skipped in front. We weren’t complaining! Having been here before on an icy day, when we used our crampons to boot pack up to the top, today was a real treat. Soft and stable snowpack with a couple tracks up already meant we were able to stay on our skis and kick turn all the way up.

Quick tea break and a speedy transition from skins to downhill and we were off into La Combe Sauvage (the Wild Valley). The ski down was without a doubt one of the best descents I’ve done so far. Everything came together to make it perfect. No wind, blue sky, a foot of fresh ice cold snow on top of a solid base, combined with a 40 degree couloir. We were in heaven.

And it didn’t stop there! With huge smiles on our faces and after a quick look back up at our tracks we were in to transition number two. Skins back on, down jacket off and we were back to climbing. This time only a 300 metre ascent but taking us to a second peak with clear views of Lake Geneva in one direction and Mont Blanc towering the endless peaks of the Alps in the other. It was time to tuck in to our still warm veggie tagine and admire the views.

Transition number three done and we were in downhill mode. Having read about ice stalagmites in a cave nearby, we headed over to an opening of a cave and lucked out. Inside were beautiful icicles from the floor to the ceiling, bigger than two of me. The ice stalagmites were just as impressive, growing up from the ground as tall as 6 feet. With the day warming up we were keen to get a move on, so after taking a few snaps we were back on our skis and had the rest of the descent to enjoy. Perfect snow, super fun terrain and the sun still shining.

The final push was a long but steady traverse of only 100 metres of vertical but around 3km in distance back to the car. We had two more transitions of skins on and off, by which point we were getting faster and wasting less and less time. Our total ascent was 1320m. We covered around 7km in distance. And our circular journey took us 5hr 45min. For us it was the perfect day!